With a burning desire to work in games, Ren Kontaris, our Game Capture and Video Artist, has made the stern decision to begin a new chapter in London. After joining our London Racing studio two years ago, he has been making the necessary steps to come closer to his dream by bringing in his knowledge and experience in 3D art, animation and illustration. While he is part of our marketing department and is passionate about collaborating with various team members to present our games in the best light possible, his talents have been noticed through the award-winning projects that he’s worked on at the company. In turn, these have opened doors to the game design teams in our studio that he is now working alongside with too. As a MFHA Champion, he also commits himself to promoting mental health and lending a helping hand to others at the company when they need it the most.

Read on to find out more about Ren’s journey, his mental health-related work and his views on persevering to achieve your greatest goals! 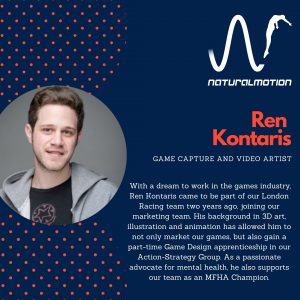 What is your role within NM/BA?

I’m the Game Capture and Video Artist at the London studio. The main part of my job is capturing gameplay footage to tailor the production of our UA videos in marketing. That often involves animating and staging cameras, building or customising levels, and working with video editing and motion graphics in order to deliver our new releases to our audiences and create as much impact as possible. Sometimes, I offer my assistance to other Zynga studios, which is great, as I get to work on many exciting projects and meet awesome people!

Tell us more about how you came to Join NM/BA.

I have a background in illustration and 3D art. While I did enjoy that, there came a time that I decided that I need to go all in and relocate to London to chase my dream of working in games. After I made the decision to move to London, as it’s the central hub for gaming companies in Europe, I made it my mission to find the best possible studio to launch my career in games, as I haven’t worked in games before but mostly on animation and illustration projects. When I received the offer from NM, it was a very quick decision for me. When I was being interviewed, I was made very comfortable and confident that I would be joining a very successful and supportive team; Jamie and Dan made me feel like here I would be enabled to achieve both my personal and company’s goals.

The types of workflows in animation projects and games have a lot of similarities as well as many differences. Apart from a 2-week work experience as QA, I haven’t been working on games prior to coming here. In my role, I take the existing content from our other 3D artists and try to present it in the best way possible through videos. While here, I’ve had the chance to do some art for myself and for some of our Game Jams, which I really enjoy. Whenever we have Game Jams at the company, I’m having the time of my life! Game Jams are a form of a competition, like a hackathon, often with their own central themes. We are asked to form teams or work by ourselves and produce content for our preferred projects. We usually get a couple of days or a little bit more than that, and at the end we get together to present the final products followed by an award ceremony. I often see things that were being produced for Game Jams being introduced as new features in our actual games. We did a Game Jam last year and I saw it as an opportunity to work on a Game Design project, and kick-start the process of achieving my goal of becoming a Game Designer. My teammate Sherif and I made a little party game that was called ‘OverCooped,’ and it won the People’s Choice Award.

What are you most proud of when working on the game(s)?

I’m generally proud to be part of NM, and even more so being part of the marketing team, as they’ve embraced me from day one and have given me all the tools and support that I need for my career. Communication is generally stellar and everyone has high emotional and cognitive intelligence, and in reality it feels like I’m in a group of good friends. While I thoroughly enjoy marketing games, my dream has been making them. After the People’s Choice Award, the Action-Strategy Team have taken me under their wing and gave me an opportunity with an apprenticeship in Game Design, which has been absolutely amazing. I work with them on a part-time basis and it’s been incredible being mentored by the great people in their team who are industry veterans and masters of their craft like Matt, Yashas and Damian. I look up to them and can’t wait to become part of their team.

Tell me how the company supported your growth?

From the moment I joined the company, I mentioned that I’m looking to transition into game design. While in most companies that could have jeopardised my application, people here were very supportive and have been trying to give me everything I needed such as time, tools, mentoring, and frequent access to workshops and brainstorming sessions. Although I’ve been in the apprenticeship for only a year now, I feel like I’ve been working towards my goal organically since day one.

As you’re a MFHA Champion, could you please describe what that means and what the role entails?

I’m part of the mental health first aider group! We’re a group of people who have taken interest in raising awareness around mental health issues. I think the company is putting a conscious effort into growing our team and is focused on providing us with even more in-depth training. We are available for anyone in the office to come talk to us about whatever issues they might be facing, and in return we provide them with advice and confidentiality. Having the ability and freedom to be genuinely heard in a safe environment goes a long way! It’s often the case that people feel like they have no one to talk to, and sometimes it can be quite difficult to open up to people who you are close to!  The Mental Health First Aiders will listen and provide support with open ears and an open mind – the best part of it is there is no criticism! As a team we have a mission to raise awareness around mental health and tackle it with spirit. It’s very important to me that the company takes mental health seriously, as especially during our times people are facing so many issues with isolation. We want to help people realise that it’s okay to be feeling a bit off and that there are many ways that you can seek help! I commit myself to raising awareness and recognising signs that people are not feeling well to help them take action in order to get out of that dark space.

What advice would you give someone trying to break into the industry?

The no.1 piece of advice is that you need to have courage and perseverance, and make sure that working in games is what you genuinely want. If I could do it, you can do it too.  It might take more or less effort for some people depending on their circumstances, but I generally think that access to education is very meaningful, as through it, apart from practical skills, you develop a professional mentality and a methodical mindset – powerful tools to have in your arsenal! If you have a solid idea about what you want to specialise in, you have to try and develop the required skill set. Nowadays, so many resources are available so it’s much easier to acquire that knowledge, but it also means that competition is high. I generally think that persistence is key and if you’re truly passionate about something, then it’s mostly a matter of time before you achieve it. I could have turned down every offer because it  wasn’t a direct pathway to get into game design. The truth is, however, is that once you get your foot in the industry, if you’re committed and hard working, then you can do whatever you like. At least that’s the idea I get at Natural Motion.

What is a common misconception your industry faces and what is the reality?

There are definitely some people out there who think that we play games all the time or that you have to be a hardcore gamer to work in games. While I personally enjoy playing games, I don’t think you have to be an avid gamer to work in this industry. There are many disciplines that require tons of expertise and authenticity apart from just being tech-savvy or artistic. Games people are also so much fun, diverse and easy to work with. I don’t see why anybody wouldn’t want to join our mission! Games to me are the medium of the present and the future because they are a blend of art and science taken to the next level through the element of interactivity. It feels amazing to work in an industry that gives so much joy to people and which provides them with fun and original ways to connect with their loved ones. The possibility of using games as more than just a medium of entertainment, is something that is really inspiring. The immersion, interactivity, depth and artistry that manifest in the form of games can be powerful tools to support and enhance education, mental health, social awareness, and many other aspects of our lives, as some more experimental projects have proven in the past. I can’t imagine myself working in another industry after working in games!