When Antonia  joined NaturalMotion almost three years ago, she went through the culture shock of transitioning from a strictly corporate environment to the more fun, creative and laid back atmosphere within the colourful walls of our London studio. Having always worked as an accountant, her transferable profession has opened her doors to the games industry, where she was able to once again fall in love with her craft despite the fact that at some point she was considering to abandon accountancy as a career path entirely.

Continue reading to learn what it’s been like for Antonia to move into a tech workplace and what she’s learned from switching between contrasting industries. 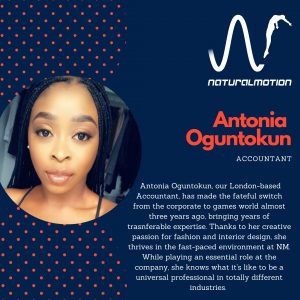 What is your role within NM/BA and how did you get here?

I work as an accountant and I came here through an agency. It’s going to be three years in February 2021. I was adamant with the agency that I wanted to work in a company that was part of a creative industry and where I wouldn’t be limited to the box-standard accounting role. When NM was recruiting, I was put forward because I made it my preference.

Tell us a little bit about your background and what you did before joining NM/BA.

I’ve always worked as an accountant, but I was always part of corporate companies, such as asset management, commercial property, charities, and recruitment. It was the usual corporate ‘9-5’ setting where you had to dress a particular way when going to the office, and I was just tired of this type of environment and wanted something new. Back in my corporate days, the greyness of my daily routine made me question whether I really wanted to do it for another 40 years, so I thought the problem was with accounting. I started exploring other options, and I even did an interior design course because I’m really interested in it together with fashion. However, at some point, I realised that I could be an accountant in any company, and so I decided to just try out another industry and see how it would make me feel. Once I joined NM, I realised that accounting was truly for me as I began wanting to finish my ACCA. Switching my working environment rather than abandoning an entire career path helped me find the right place for myself.

How do you support your team?

My role varies on a week-to-week rather than a day-to-day basis, so I take care of stuff such as payroll, pensions, month end and other essential cost-related processes. As soon as I tell people that I deal with payroll, they respond with, “oh, I would want to be your friend!” I always make sure that I’ve done my bit because each person’s actions within my team have a domino effect, and it’s important to do your part on time. Staying on top of everything is absolutely essential.

I’d say I have definitely progressed well in my team and in my role, and I’m hoping to progress a bit more in the near future by moving to a more leadership position while picking up more responsibilities. I may not be a managerial type of person, but becoming a senior would fit my current goals and I am looking forward to that.

How did NM/BA support your growth?

It’s been very supportive. Prior to COVID-19, I was interested in finishing my ACCA. All the necessary funds for that were approved and I was given the go-ahead by my manager and the finance department. They are very good at encouraging further education and anything that helps you progress within your role. When I was interested in various courses, I was always provided with both financial and mental support.

What does it mean to you to be a woman in technology and gaming?

Coming into this company from the corporate world has been a bit different, as I suddenly had so many men around me. In my team of six, we have two women, including me. To be honest, I enjoy working with men because they all just seem so relaxed and I’m happy with my team’s dynamic. Maybe that competitive streak that men naturally have can also be good because it pushes you to want to do more, and they’re there to motivate you while making sure you aren’t overwhelmed. If you have transferable carriers that can be found in any industry, then definitely consider tech, especially if you are a female, because a lot of females may worry about the industry being male dominated. That’s true to a degree, but it’s not dominated in a way that you would feel intimidated, which I think would be the case in a corporate world. So, don’t be put off by the imbalance between female and male employees. I never felt that it’s overly competitive here because of the gender ratio, whereas in a corporate environment, I feel that there’s more competition among people even if there may be a more balanced gender ratio because everyone wants to showcase their work.

What is it like to be a woman of color working in gaming?

Being a woman of colour in gaming has both pros and cons. While you are able to be at the forefront of creating an impact that will lead to increased awareness on the issue, it can be hard to try and balance this with your normal work load.

I would say that the gaming world is not really diverse, however since joining NM I have seen an increase in both female and ethnic minority recruitment, which should hopefully continue.

How would you describe the people within NM/BA?

It’s hard to describe, but we have fun as though we’re at university. It feels like a family to an extent, and it’s energetic and chill at the same time thanks to all the social activities going on and the support you receive. It’s fun, enjoyable and peaceful working with the people here.It’s all in the atmosphere; the grey and empty walls of a corporate company vs the colourful walls of NM speaks for itself. When I worked in a corporate setting, apart from being surrounded by bare walls, my view also consisted of another grey building.

Why is a culture like this so important to you?

It depends on what type of environment you may find most comfortable. I like being active, creative and having colours around me, so I enjoy being surrounded by these elements. I could go into work and each day would bring something different. Whether it’s a new game release coming out, achievements being celebrated or some social, sporty and creative activities being organised, they all help make my job seem not as tedious as in the corporate world. Even though accounting can be monotonous on a monthly basis, if you are working in an atmosphere where everything is constantly changing, it definitely reflects on your work.

What advice would you give someone considering to join the industry?

Think about it personally rather than career-wise. I’m into fashion and interiors outside of work so I value creativity, and this is what drew me to joining NM. It’s important to surround yourself with what you like to do as a hobby, because you will be spending the majority of your time at the office and you have to be comfortable with the environment. If what you do outside work is creative, such as dance or photography, then I’d say the games industry is for you. Of course there will be differences between your hobbies and the office environment, but the foundation principles are the same. If you’re switching from another industry, it will be a culture shock because it may seem that everyone’s so relaxed. Coming from a place where everyone begins stressing at 8.59 am and lives according to the strict daily divisions of ‘work time,’ ‘lunchtime’ and ‘home time,’ you will be surprised by how calm everyone is here. People chat over food and have their breakfasts together, and we have food being provided to us. It is very different compared to a place where everyone argues over who used whose milk. Whereas here, it’s all taken care of, and it can definitely seem too good to be true. It’s even about the way people dress. When I first started, I continued to dress in a corporate way and I looked so serious around everyone, as they were just wearing t-shirts and jeans. Once you get your head around it and realise that it’s not too good to be true, then it starts to feel absolutely great.